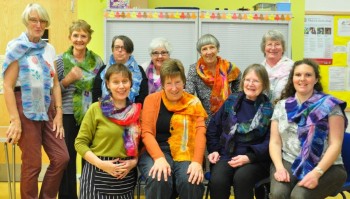 A had a great day with these lovely ladies in Dunbar yesterday. They each designed and made a fantastic scarf.

Perhaps you know of a group that would like me to deliver a workshop. Willow weaving or felt- just get in touch.

I had a great day at The Royal Grammar School on Wednesday. The students in Year 4 each designed a fabulous fish and then used their designs to create silk paintings. The results were stunning. 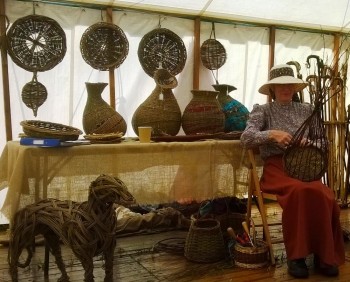 I had a good day demonstrating and talking to people about basketry at Beamish yesterday.

I will also be taking part in their 'Hands on Heritage' Event on 24th & 25th Septemeber. So come along and have a go at some willow weaving. 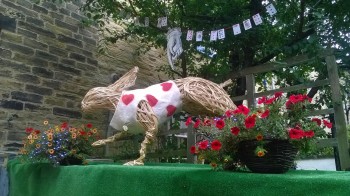 I was selected to take part in Saltaire Festival as part of the Open Gardens Sculpture Trail. For an Alice in Wonderland -themed Garden I created the White Rabbit woven in white willow and clothed with a felt waistcoat made from the fleece of our Shetland Sheep.

Making a Willow Foal at the Glendale Show 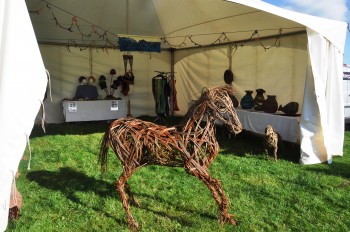 What a privilege - I had my own marquee at the Glendale Show and spent the day demonstrating, working on my Willow Foal. He proved very popular!

First Felt Workshop in the new studio at Biteabout 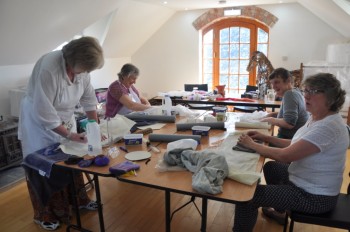 It was a great experience to hold my first felt workshop here, at the studio at Biteabout. The space is just fantastic!

My article about Cuthbert's cloak has been published!

Cuthbert's relics will now go on exhibition in September 2017, so the cloak and other commissioned artworks will be exhibited soon after this.

A Cloak for St Cuthbert, commissioned by Durham Cathedral. 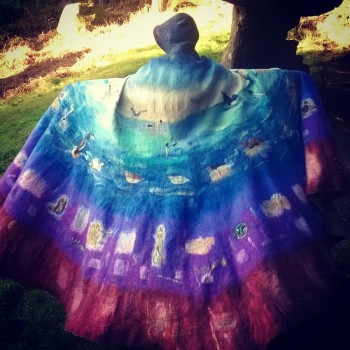 My biggest felt commission to date was completed at the end of last year. The felt cloak was designed to be worn for story telling and reflects the life and legacy of an important local figure. It is richly decorated with imagery from the wildlife of Lindisfarne, images from the Lindisfarne Gospels and also from the silks that were placed in the coffin after his death.

Before it was delivered I was able to have some photographs taken of me wearing it at and above Cuthbert's Cave.

It will be exhibited alongside Cuthbert's treasures when they are exhibited later this year in the newly developed areas of Durham Cathedral.

I ran my first feltmaking workshops of the year at The Cheviot Centre in Wooler. The nuno felted scarves were very popular. We had great fun and what a stunning range of creations!

If you would be interested in having a go, let me know and I will organise another.

The building of my new workshop is progressing well. The floor is down, and all the plasterboard is on the wall. The first fix electrics are done, so the next step, is the plastering. It's an amazing space. When its all finished I will be delivering a range of workshops here. 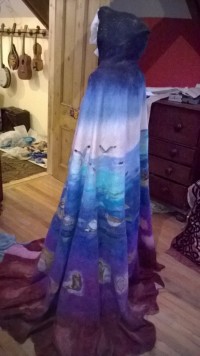 Due for delivery on 4th January.

Will let you know when the exhibition starts.

I am very excited to be one of four artists commissioned for Durham Cathedral's Open Treasure Project, Recreating The Community. I am to produce a piece inspired by the 'Cuthbert Silks' and the coffin of St Cuthbert. This is to be a felt cloak.  I shall be updating you on it's progress.

So how has my commission been developing?